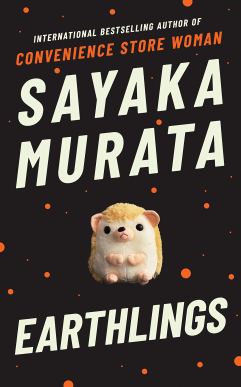 “The person who had given birth to me said I was a dead loss, so I decided it really must be true.”

A few days before reading Earthlings I read Sayaka Murata’s Convenience Store Woman and I really loved its humour and eccentric narrator. So, perhaps I approached Earthlings with the wrong expectations. Or maybe I was fooled by its cute cover (I mean, just look at that hedgehog!). Fact is, Earthlings is an altogether different beast to Murata’s previous novel. I can say, without the shadow of a doubt, that Earthlings is the most bizarre novel that I have read (and I’ve read a fair amount of books).
If you thought Convenience Store Woman was weird, well, be prepared as Earthlings is on an altogether different level of weird. Narrated by Natsuki, a young girl who is made to feel like an outsider within her own family and is regularly subjected to verbal and physical abuse from her mother and her sensitive older sister. Natsuki seems resilient enough though and finds reassurance in the belief that Piyyut, a plush toy hedgehog, is an alien from the planet Popinpobopia. Natsuki is eager to help Piyyut on his quest, and reveals only his true identity to her cousin Yuu who in turn tells her that he’s an extraterrestrial. Both of them live in difficult households and are made to feel like burdens. Their bond strengthens, so much so that they begin to call each other ‘boyfriend’ and ‘girlfriend’, keeping their relationship a secret from the rest of the family. Sadly, the two are only able to meet up in the summer during their visits to their grandparents (who have a house in the mountains of Nagano).

“With my eyes closed, drifting in space, it felt as though the spaceship from Planet Popinpobopia really was close by. I was immersed in my love for Yuu and my magical powers. As long as I was here in this space, I was safe and nobody could destroy our happiness.”

Natsuki’s school life takes a turn for the worst when an ‘attractive’ young teacher begins to make sexual advances which will escalate to abuse. These horrific encounters will plague Natsuki into adulthood, as she will find it impossible to form an intimate relationship with another man. Her memories of Nagano and Yuu do lighten her days. However, to keep her family at bay, she forces herself to obey the norms of society and marries…but her married life is far from conventional.
There are many explicit scenes in this books. Some of them were simply vile, and frankly gratuitous, while others were so outlandish as to be funny (in a fucked up sort of way). This novel has quite a few scenes that made me drop my kindle and wonder, out loud, “WTF did I just read?”. Here are some examples (readers’ discretion is advised): (view spoiler)[Natsuki’s teacher forcing her to give him a blowjob, Natsuki and Yuu having sex (they are both twelve and the scene is detailed in stomach-churning detail), discussing the nutritional value of sperm (the characters are wondering whether they should start eating it), Natsuki’s husband declaring that he’ll “go and try having sex with my grandfather” who is in a vegetative state, a few graphic stabbings, cannibalism, possible alien pregnancies. (hide spoiler)]

What started as a dark coming of age soon morphed into a nightmarish and feverish horror show.
The book delves into disturbing subjects in a surreal and occasionally abrupt sort of way. The horrible things that keep happening to Natsuki and her alienation (towards her family, society, reality) are mediated by her unnervingly enthusiastic tone. She’s perfunctory when noting what her parents and sister feels towards her and criticism of society’s fixation on reproduction have a spring to them:

Similarly to Convenience Store Woman the narrative of Earthlings interrogates existing notions of normalcy as well as questioning what being a ‘useful member of society’ entails. While Convenience Store Woman was far from subtle, it allowed more room for interpretation, Earthlings, on the other hand, is far more obvious. Natsuki, and two other central characters, use the ‘Factory’ metaphor in most of their discussions concerning their society and lives. It was a bit on the nose for me.
The ending was baffling and made me wonder what the point of this novel was. Certain scenes were so ludicrous as to be amusing and Natsuki’s narration certainly held my attention but even so I wonder whether those really graphic scenes served a purpose other than ‘to shock’ the readers (I don’t think so). Murata’s treatment of emotional and sexual abuse is also rather questionable.
My advice is this: be weary of Earthlings.