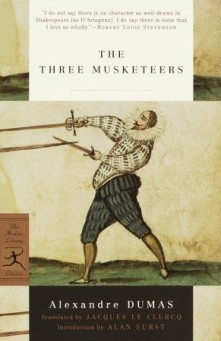 While I understand historical context and I am quite able to appreciate classics without wanting them to reflect ‘modern’ sensibilities, I have 0 patience for books that glorify rapists.

I don’t mind reading books about terrible people. I read Nabokov’s infamous Lolita and Highsmith’s The Talented Mr. Ripley. I enjoy books by Agatha Christie and Shirley Jackson, which are often populated by entirely by horrible people. Unlike those authors, however, Alexandre Dumas goes to great lengths in order to establish that his musketeers are the ‘good guys’. Their only flaw is that of being too daring. The omniscient narrator is rooting hard for these guys and most of what they say or do is cast in a favourable light and we are repeatedly reminded of their many positive or admirable character traits. If this book had been narrated by D’Artagnan himself, I could have sort of ‘accepted’ that he wouldn’t think badly of himself or his actions…as things stand, it isn’t. Not only does the omniscient narrator condone and heroicizes his behaviour, but the storyline too reinforces this view of D’Artagnan as honourable hero.

Our diabolical femme fatale and the dignified male villain
Milady is a demon. She’s diabolical. She’s evil. Both the narrative and the various characters corroborate this view of Milady. Much is made of her beauty and her ability to entice men. Sadly, we have very few sections from her perspective, and in those instances she’s made to appear rather pathetic.
Our Cardinal on the other hand appears in a much more forgiving light. He’s the ‘mastermind’, the ‘brains’, and he’s a man, so he gets away with plotting against our heroes.

This book made me mad. I hate it, I hate that people view D’Artagnan & co as ‘heroes’, that the musketeers have become this emblem of friendship, and I absolutely hate the way women are portrayed (victims or vixens). I don’t care if this is considered a classic. Fuck this book.