“That’s the problem with summoning demons, you see. Sooner or later somebody else raises them against you.”

Readers who enjoyed Stuart Turton’s previous novel will probably find The Devil and the Dark Water to be a far more captivating read than I did. While I personally was not enamoured by The Seven Deaths of Evelyn Hardcastle, I was willing to give Turton another try.
The first quarter of The Devil and the Dark Water had me intrigued. The narrative opens in Batavia (Jakarta) in 1634. Our protagonist, Arent Hayes, a former mercenary turner bodyguard, is accompanying his employer and friend, Samuel Pipps, on a voyage to Amsterdam. This trip is not for pleasure as Samuel, a famous detective, has been convicted of a ‘mysterious’ crime and is under arrest. Arent wants to prove his innocence, but not knowing the crime Samuel has been accused of obstructs his attempts to free him. Still, he’s determined to protect him and decides to go alongside him to Amsterdam. As the passengers and crew embark this ship however, they are intercepted by a leper who perishes after pronouncing an ominous threat.
Before Samuel is taken to his cell in the ship, he tasks Arent with finding out more about the leper, believing that his threat was not empty one, and that someone means harm to the ship.
There are quite a few characters, but the 3rd person narrative tends to focus on Arent, the Governor General Jan Haan, and his wife, Sara Wessel. Sara, who happens to be very forward-thinking and in possession of some fine detective skills, joins Arent, and the two try to question the less-than-friendly crew and investigate the ship in order to find out whether something is truly haunting it.
Sinister occurrences seem to confirm our characters’ fears: someone or something is set on stopping the ship from reaching its destination.

At first the story held my attention, and I did find the novel to be rather atmospheric. Turton has clearly done extensive research in the way ship’s operated (from its hierarchy to the mentality of those willing to lead such a life) giving plenty of specific details relating to its various parts and or levels. Now, sadly, I can’t say the same for the narrative’s historical accuracy. The characters spoke in a very modern way, with the occasional ‘mayhap’ to give some authenticity. While sometimes adding modern elements to historical films or books can work (such as with The Favourite), here it just took me out. Having Sara remind herself and be reminded by others, such as her maid, that she is a ‘noble-woman’ seemed odd. While I understand that Turton did so because he wanted to explain to his readers that because of her class Sara could and couldn’t do certain things (or should be addressed in a certain way by those belonging to a lower class) or , but surely he knows that his audience would be already aware of this? The interactions between the characters also struck me as modern, and it seemed weird that every woman on the ship was so ahead of her times (Sara’s daughter is a genius). Arent struck me as the typical ‘giant’ with a heart of gold, who may have done some bad things in his past, but has now turned a new leaf. Samuel plays a very minor role, and while it made sense given his imprisonment, as things escalate on the ship, I would have expected for Arent to seek his counsel more often.
The middle of his novel drags. Arent and Sara investigate by asking the same boring questions to the same people, they explore the ship some more, and that’s kind of that. The Governor, who is compared to a hawk and happens to have very sharp nails, acts like a Bad Guy, which is not a spoiler since within a few lines of being introduced to him we know that he beats his wife.
Arent and Sara were similarly ‘good’. Unlike most other people on the boat they do not approve of the United East Indian Company. Given their respective backgrounds their humanitarian awareness seemed a tad odd.
Also, the whole romantic subplot….puh-lease.
There were quite a few moments that were meant to ‘unnerve’ the reader but I personally found them comical.
When characters made a certain discovery or realised something (“It can’t be…” he said out loud, as the answers arrived in a dizzying rush. “It can’t be…”) we had these ‘cliff-hangers’ as the narrative would jump to another character and by the time we returned to that other character I no longer cared to learn of their discovery. The writing in general wasn’t to my taste : “she had so much life, it was bursting through the seams of her” / “he was coming apart at the seams” / “her daughter’s [eyes] glittered with life. Her husband’s were empty, like two dark holes his soul had long run out”.
Toward the ending things take a chaotic turn. There are a few twists, most of which I’d predicted (not bragging, I have merely read enough mystery novels to know how certain stories will unfold). The novel’s main twist was painfully clichéd and made very little sense (it was obsolete).
Long, boring, unconvincing, and with a vague ‘historicalness’ that is miles away from the likes of Sarah Dunant or Eleanor Catton.

While I understand historical context and I am quite able to appreciate classics without wanting them to reflect ‘modern’ sensibilities, I have 0 patience for books that glorify rapists.

I don’t mind reading books about terrible people. I read Nabokov’s infamous Lolita and Highsmith’s The Talented Mr. Ripley. I enjoy books by Agatha Christie and Shirley Jackson, which are often populated by entirely by horrible people. Unlike those authors, however, Alexandre Dumas goes to great lengths in order to establish that his musketeers are the ‘good guys’. Their only flaw is that of being too daring. The omniscient narrator is rooting hard for these guys and most of what they say or do is cast in a favourable light and we are repeatedly reminded of their many positive or admirable character traits. If this book had been narrated by D’Artagnan himself, I could have sort of ‘accepted’ that he wouldn’t think badly of himself or his actions…as things stand, it isn’t. Not only does the omniscient narrator condone and heroicizes his behaviour, but the storyline too reinforces this view of D’Artagnan as honourable hero.

Our diabolical femme fatale and the dignified male villain
Milady is a demon. She’s diabolical. She’s evil. Both the narrative and the various characters corroborate this view of Milady. Much is made of her beauty and her ability to entice men. Sadly, we have very few sections from her perspective, and in those instances she’s made to appear rather pathetic.
Our Cardinal on the other hand appears in a much more forgiving light. He’s the ‘mastermind’, the ‘brains’, and he’s a man, so he gets away with plotting against our heroes.

This book made me mad. I hate it, I hate that people view D’Artagnan & co as ‘heroes’, that the musketeers have become this emblem of friendship, and I absolutely hate the way women are portrayed (victims or vixens). I don’t care if this is considered a classic. Fuck this book.

You would think that dragons + the Napoleonic Wars = entertaining story . . . yet His Majesty’s Dragon managed to be consistently boring.
I was expecting something in the vein of Jonathan Strange & Mr Norrell and Sorcerer to the Crown but I soon realised that His Majesty’s Dragon lacks the spark that animates those novels.
Novik is a good writer but she seemed to be restricting herself to the same two or three scenarios throughout the course of her novel. It seemed that Novik was focused more on making the dialogue and Laurence’s reactions believable (as to be consistent with the time the story is set in) than to write an actual story. If I were to replace the dragons with any other animal, eg. horses, very little would change. These dragons lacked the fantastic or alluring aura that dragons should have. I understand that within this universe dragons are ‘normal’ but the story could still make them interesting. Novik’s dragons are basically giant winged cats. 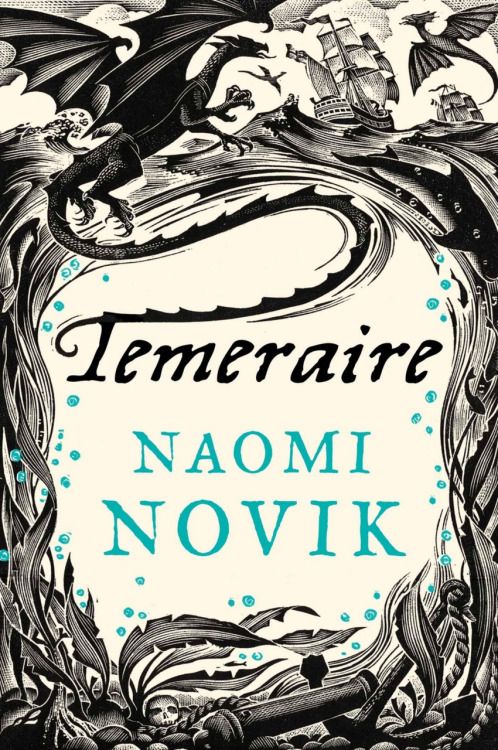 The story, if I can call it that, revolves around this Laurence guy, a good old 17th century man (so he is obviously both righteous and conservative) who ends up having to give up his life at sea so he can become an aviator…his new ride is Temeraire a relatively cute dragon who talks in a contrived manner…but hey. Laurence washes his dragon, he rides his dragon, he has some minor quibbles with other aviators…and that’s that.
The plot was mainly concerned with ‘theory’ and not practice. The characters discuss strategy and tactics, they have a few fights, but all of these scenes lacked the sense of urgency and or suspense that they should have .
This concept would have worked better in a novella rather than a full length novel. The story is boring, the dialogues are monotonous, and the characters are just as bland as the dragons. There are a few scenes that I could consider ‘cute’ but they didn’t really make up for the rest of the novel.
Lastly, in spite of the seeming accuracy of the time (dialogues & customs) I don’t think Novik evoked the 17th century really well. Her depiction of this period is flat and the story lacks a sense of place. And, what about the actual war? Laurence – or any other character for that matter – has very little to say about it…
If the author wanted to take a lighter approach to the Napoleonic Wars then perhaps a bit of humour could have salvaged her story. Jane Austen, for one, knew that wit could go a long way…

View all my reviews

Le Fanu, who to his own discontent was proclaimed as being ‘the Irish Wilkie Collins’, is celebrated for having written one of the first vampire stories. One of the most discussed aspect of ‘Carmilla’ is not the vampirism itself as much as the fact that both the vampire and the victims are female. I was expecting a Gothic and atmospheric tale but I found Carmilla to be a lacklustre story one that has not aged well. Modern readers are accustomed to the idea of ‘vampires’ and in Carmilla nothing comes as a surprise. Carmilla’s vampirism isn’t shocking or even amusing like it would have been if Collins had written it. The trope that Carmilla has created doesn’t do the original story any favours.
Carmilla, the eponymous ‘villainess’ of Le Fanu’s novella, should be the embodiment of female sexuality. She should be monstrous and powerful. But she simply comes across as needy and creepy. Her masculine attributes are overshadowed by her childlike mind. Her obsession with Laura was completely insipid.
Le Fanu’s characters are as bland as their background. His writing offers nothing remarkable.
A short and predictable tale.